What do we learn from ice cores?: The Paleothermometre

One of the most crucial information that we can extract from an ice core is the temperature that existed at the time the snow deposited at the surface of the ice sheet. We will make an attempt today to better understand the principle of this “thermometer of the Past” (Paleo-thermometer).

A little bit of basic chemistry (good old school days!): Ice is solid water (H2O). It is made of an assemblage of atoms of Oxygen and Hydrogen. Atoms are characterized by a core, made of protons and neutrons, and electrons spinning around it. The number of protons (atomic number) in the core define the “name” of the atom: Oxygen has 8 protons in its core and Hydrogen only 1 proton in its core. However, there exist several varieties of atoms of Oxygen and Hydrogen, differing by the number of neutrons in their core. Less neutrons in the core will make the atom lighter, more will make it heavier. We call these various atoms of oxygen or Hydrogen “isotopes”.

To make a long story short, let’s talk about Oxygen only. A similar story could be told for Hydrogen in the water molecule.

A molecule of water containing lighter isotopes of Oxygen will be lighter than a one containing heavier oxygen isotopes. Nature is such a nice friend to scientists that there is a simple (linear) relationship between the temperature at which the snow accumulates at the surface of the ice sheet and the proportion of light and heavy water molecules in the snow: the colder the temperature, the higher the amount of light water molecules that will be present in the snow and vice-versa. This is illustrated in Figure 1 for the Antarctic and Greenland. Scientists quantify the proportion of light and heavy isotopes in water molecules by the symbol d18O (for Oxygen, where the most abundant heavier version is 18O, as compared to the dominant lighter isotope 16O). When d18O is negative, the snow sample contains less heavy oxygen isotope than the “reference”, which is standard ocean water (the most abundant at the surface of the Earth) and vice versa. So, in brief, the lower the d18O of the snow, the lower the temperature when it fell at the surface of the ice sheet, and the relationship is linear (see Figure 1). The same will be true for d2H (also written dD, D is for Deuterium, the heavy form of Hydrogen, with 2 neutrons in its core). 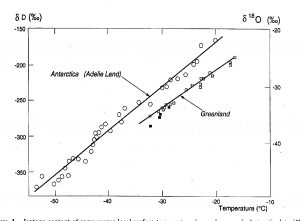 Figure 1 : the linear relationship between snow d18O (or dD) and the air temperature when it falls at the surface of the ice sheet: the principle of the paleo-thermometer.

For each successive layer in our ice core, we can then measure the proportion of light and heavy oxygen isotopes (d18O) or Hydrogen isotopes (dD) in the snow (that became ice) to reconstruct the temperature that existed at the time that layer of snow was at the surface of the ice sheet: this is the principle of the paleothermometre.

The beauty of the technique is that it works at all timescales: we will for example clearly see the difference between a glacial period (cold period with very negative d18O or dD) and an interglacial period (warm period with less negative d18O or dD) on long time scales. Not only that …we will also be able to discriminate summer (warmer) from winter (colder) each year. This is crucial, since we will then be able to “count the years”, and therefore date the core from those seasonal fluctuations of the water stable isotopes signals (d18O or dD), as shown in the example of Figure 2.

By measuring the thickness of ice that exists between two peaks (or two troughs) of the seasonal d18O or dD signal we will be able to reconstruct the annual snow fall at the surface of the ice sheet, one of the major goals of the Mass2Ant project, as you already know by now!… 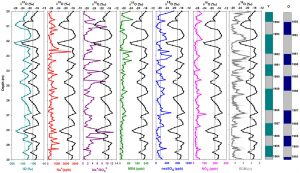 Figure 2 : An example of d18O (black curve) and dD (light blue curve) profiles between 20 et 30 m in the Derwael Ice Rise ice core, in the vicinity of the ice coring locations of Mass2Ant (Philippe et al., 2015). This depth interval covers 10-11 years of accumulation, as shown by the seasonal fluctuations of the water stable isotopes (d18O.et dD)….”Rendez-vous” in one of our next blogs to understand what the other profiles mean !