What did we missed when we were in Antarctica?

Our mission is close to its end, even though the way back can still be long. After the post on the end of the measurements and the trip back to Princess Elisabeth station, this one is devoted to what we missed during those seven weeks.

The first point is without any doubt our family and friends. We all knew before leaving the conditions and the length of the stay. I think that none of us was really sad because of the separation but you only had to see the face of those who just gave a phone call or received an email to know how we missed our families.

A second element is food. Even though we have eaten nice frozen meals, we all dream of some fresh fruits, raw vegetables, grilled fished or meat. Each of us also has a special dish that he or she will find with pleasure when back home, being fries, a croissant, or a favourite yoghurt.

END_OF_DOCUMENT_TOKEN_TO_BE_REPLACED

Back to Princess Elisabeth Station

We have definitely left our camp on the ice rise that we have named TIR for Tison Ice Rise. We have announced it to our chief scientist for whom it is likely the last mission in Antarctica, during our last evening dinner on the site.

The official choice of the name of a location in Antarctica depend on a specific commission. This is thus complicated and requires a lot of time but, for us, it will remain the TIR.

Jean-Louis next to the wood tower that protects the drilling hole and will be removed next year to perform new measurement.

The dismantlement of the camp was a bit more perturbed than planned as we had a storm over the last days there. It was less strong that the one that hit us late December but, during the removal of the drilling tent, all the skill of our accompanying team and the involvement of the whole group was required to avoid that part of it fly away.

Logistics and organization in Antarctica are full of surprises. We were supposed to leave the camp the 12. After a rumor for the 14th, an announcement for the night from 12 to 13, we finally left the 13 in the evening.

We came back through the camp where we slept a few nights when we made the measurements on the site of last year drilling site (FKIR) and finally arrive at the Princess Elisabeth Station after a 20 hour trip spend in the container that were used as kitchen, talking a bit, playing games but mainly sleeping after all those short nights despite the bumps on the ‘road’. 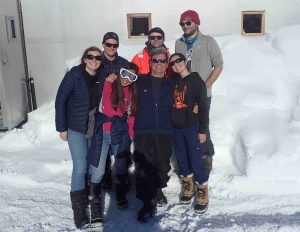 The team at the arrival at Princess Elisabeth station

We also had to prepare the transport of the ice cores. After we leave, they will be brought to Perseus, an air strip close to Princess Elisabeth Station. They will then fly in an Iliouchine to Cape Town and finally by boat in a container at -25°C towards Anvers. They are expected in Brussels in early March. This step is always a bit stressful as the ice cores should of course not melt during the journey but even not warm up to avoid reactions in the ice that would modify the amount of some components! 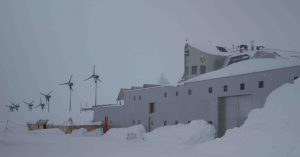 The Princess Elisabeth station on a snowy day

For our departure from Princess Elisabeth Station, we should wait for the right weather. Several days were mentioned over the last few days. If everything goes well, it is planned to go back through the Nov air base and then Cape Town as on the in. The departure is expected on the 19th, arriving in Brussels the 21st if everything goes as planned. 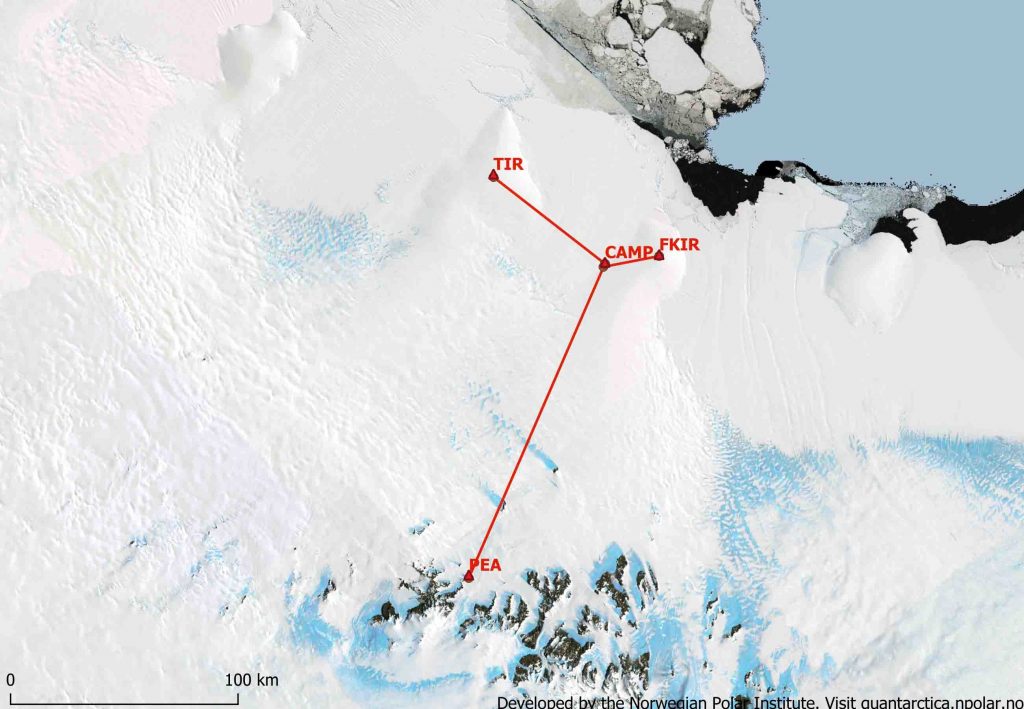 Map showing the region north of Princess Elisabeth Station (PEA) with the first camp where we spend a few nights (CAMP), the first ice rise we visited (FKIR) and the second one where we drilled the ice core (TIR)