Why Belgium continues to keep an exceptional position in Antarctic research

Our previous blog post has described how the efficiency in the logistics and the expertise of the International Polar Foundation allows carrying out research projects like Mass2Ant.

You have seen that polar research implies strong logistic constrains, in a remote place. Polar research also requires up-to-date scientific equipment in the field and in the laboratories for the analyses as well as manpower from the researchers and technicians involved.

Here, as in many other cases, funding remains the key issue! Belgium does not have a polar institute with specific funding like other European countries (France, Germany, Italy,…) and Belgian scientists must thus find other funding sources.

Thanks to its historical involvement in Antarctica (since the expedition of de Gerlache in the late XIX century), Belgium has always maintained a strong position in Antarctica, and more generally in polar research.

A decisive step in this process has been the relaunch of Belgian Antarctic Research in the 1980’s under the umbrella of Belgian Science Policy Office (BELSPO). In the framework of research projects for sustainable development in Belgium, a program dedicated to Antarctica has been set up, organized by a specific administrative team in charge of the selection and follow up of the research project based of international reviews and of the links with IPF.

Those faithful actors that are not under the spotlights have maintained the pressure on several governments to remind politicians the importance of polar research for our understanding of global climate and environmental changes. There are likely the best people to testify of the quality and good international reputation of Belgian Antarctic research.

BELSPO has been recently dismantled by a political will of the previous governmental coalition to suppress all federal scientific activity, reducing the budget allocated to Belgian polar scientists by more than 50 % even though those research budgets are extremely small compared to the investments allocated to other topics. Isn’t finally about the health of the entire Earth?

We can be proud of our Princess Elisabeth Station, still supported today by the Belgian politicians but there is a risk that it becomes rapidly an ‘empty shell’ if Belgium stops to support Belgian Polar scientists. 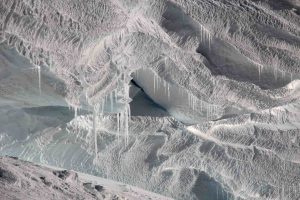 Even as far inland as close to Princess Elisabeth Station ice can melt is some places. Photo Nander Wever.