Welcome in the ETISOL world!

Hello everybody ! Here are the fresh news of the drilling tent to tell you more about the second phase of the process in which we were obliged to move to a wet drilling mode.

As mentioned in one of my previous posts, starting at a depth of about 90-100m, just after the transformation of snow (density of 0.5 g/cm3) in firn (density 0.5-82 g/cm3) and then in ice (density 0.82-0.92 g/cm3) is finished, the pressure difference between the ice and the air in the drilling hole becomes too high.

The mechanical chocks from the cutting by the drilling head produce ice in small disks, a few centimeters wide, that makes further analyses extremely hard or even impossible in some cases (such as for instance the analysis of the gas composition of the ice because of the contamination from the actual atmosphere along the fractures).

The only solution is to use a liquid that you introduce in the drilling hole, in increasing quantities. This liquid can be added only when you reach the ice layers, otherwise it would infiltrate the porous firn layer.

This liquid should not freeze and have a density close to the one of the ice (to avoid that the drilling hole closes because of the ice deformation). In this framework, the choices are limited and we cannot avoid organic compounds with sometimes unpleasant properties.

The happy winner in our case is a special brew, tuned after many years of research by our Danish colleagues, world specialists in ice drilling: the ETISOL.

The ETISOL meets all the requirements, while being likely less dangerous for the health of the users compared to alternatives. It is just better to avoid contacts to your eyes and skin. The ETISOL has a smell that stays on your clothes (the producers nicely qualify it as ‘fruity’). It also likes rubber (such as the one on the shoes, Figure 1) and increase the size of your clothes (for instance the protecting gloves … no, the one you see on Figure 2 are not XXXL). 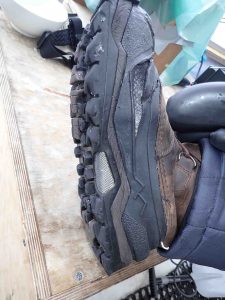 ETISOL loves the rubber of the shoes 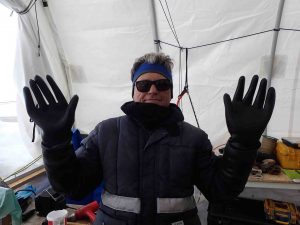 Etisol increases the size of the clothes, here the protection gloves

The drilling fluid also allows the lubrication of the cut, which limits the chocks. However, the drill must be modified to use it in a wet environment. The cutting ships must be collected in the top of the external tube, where they are brought by a small Archimedes ladder. As a consequence, the tube that ends with the cutting head and receives the ice core must be shorter, one meter here.

When the tube is pulled back to the surface, the pleasure starts. Four people are not too much to collect the drilling fluid that flows everywhere. When the internal tube is removed (Figure 3) and the precious ice core extracted (Figure 4), it is still necessary to empty the external tube from the drilling fluid and the cutting ships (Figure 5 and no this is not a problem of digestion of the spaghetti Bolognese of the day before). Finally, the fluid is carefully separated from the cutting ships (they do not have the same density when the ice melts) to be recycled and used in the next liquid injection. 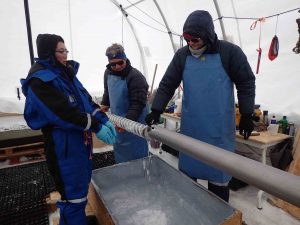 Extraction of the coring tube 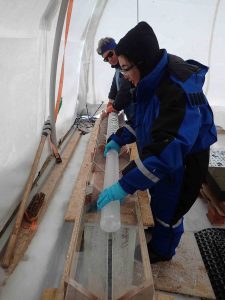 Extraction of the ice core 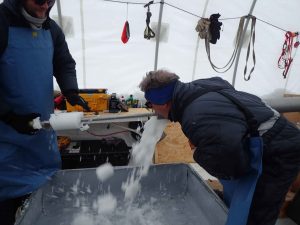 Removing the cutting ships and the drilling fluid from the tube

So, I let you here to have a good shower and dry my shoes on the heating system of the bathroom … and I risk to lose a few good friends.