How to spend 4 perfect days at Novo air base, Antarctica ?

The beginning of the trip towards Antarctica was relatively standard: arrival at the airport early in the morning, queuing at the security control, crossing the border, going to the gate. The announcement of the flight was still a bit exotic and the Boeing 757 much more comfortable than the other planes we are used to!

The announcement of our flight at the gate

Things changed about one hour before we arrived at the Novo base. We left Cape Town in normal clothes, adapted to summer in Southern Africa. However, after a specific security check, our polar clothes were waiting on the ground so that we can carried them with us in the plane.

After a signal from the crew, the heating system was turned off and the plane became a big changing room with everybody wearing the polar clothes before the landing. The views from the plane also started to become amazing.

The flight over the sea-ice, the ice shelve, the icebergs floating over the ocean and the arrival at the coast were one of the most beautiful and exciting landscape are happened to see.

View from the plane of sea ice floes with the continent in the back before landing in Novo. Pic by Nander Wever

Antarctica has many wonders to offer but logistics can be a nightmare. We were informed in Cape Town that, despite the fair weather, we cannot be transferred directly to Princess Elisabeth Station. The plane we were supposed to take was not available, being stuck in another station.

Arrived at Novo, the weather forecast was bad for the next few days. We had to be prepared to wait several days in containers nearly without external communication and without knowing exactly when we could leave.

We were of course not alone and some scientists where waiting for more than one week when we arrived in Novo and still did not know when they could fly to their final destination.
There is not much activity available in Novo, no bar or nice meeting place. Waiting here is a good opportunity to catch up with the sleep and finalize some elements of the measurement campaign as the last days in Belgium were quite busy.

The days are organized around three important events: 8h30 for breakfast, 13h30 for lunch, 19h30 for dinner. Each time, we can stay 30 minutes in the room where the meals are served before the cook inform us that it is time to leave. 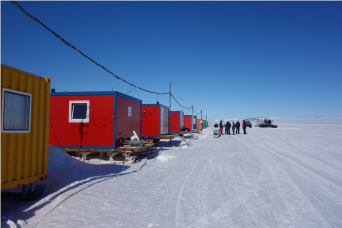 We are not supposed to quit the area of the base as there may be dangerous zones with crevasses. No long promenades or hiking on the ice then, but we can have nice after dinner walk, admiring quietly the colours of the ice changing with light.

Fortunately for us, the conditions will likely get better on Saturday and we should reach Princess Elisabeth station tomorrow, more than one week after leaving Belgium and then send this post for the blog.